The Sound of Music: Opening Night

Wonderful performances abound in the new national tour of The Sound of Music that opened tonight at the Lexington Opera House and plays through Sunday.

The tour has been receiving critical acclaim since it first mounted in 2015. I am pleased to report, even with a few major cast changes since its inaugural season, it is resoundingly deserving of the accolades. As the production unfolds, one quickly appreciates how the director and creative team chose to eschew sentimentality and cliche and present a new vision of The Sound of Music that brings the 58 year old American classic into 21st century. It's Fifty-Eight Going on Seventeen. 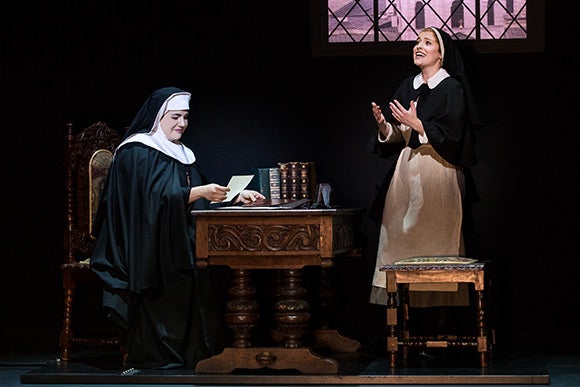 Jill-Christley Wiley, blessed with a glorious soprano voice, is earnest and genuinely sweet as Maria. Capt. von Trapp is played by dashing newcomer Mike McClean, who is younger (thankfully) than one generally sees in this role. The result? Romantic scenes between youthful Maria and the Captain are quite palatable rather than creepy.

While the whole cast brings exceptional voice to the stage, of particular note is Lauren Kidwell. Her Mother Abbess has a powerful voice whose stage presence is electric and calming at once. Her Act One closer "Climb Ev'ry Mountain" may very well turn out to be the highlight of this entire remarkable season of Broadway Live at the Opera House.

Amid all this glorious singing and beautiful scenery, of course, is the dramatic centerpiece of the story. It is worth noting the storyline remains sadly relevant to current affairs over half a century later, as Nazi swastikas provide a backdrop to the concert where the von Trapps perform before fleeing Austria. If you're bringing children to the show, be prepared to answer some hard questions afterward. But perhaps that is what art, across the generations, is really all about.

As one recent reviewer so aptly noted, "It is the enduring message of hope and the ability of the human spirit to overcome, that makes this particular musical a treasure, and so worth seeing."

So perhaps we've yet to climb ev'ry mountain. But the view from the balcony in the Lexington Opera House this weekend is a breath of fresh air.