OPENING NIGHT: THE WIZARD OF OZ 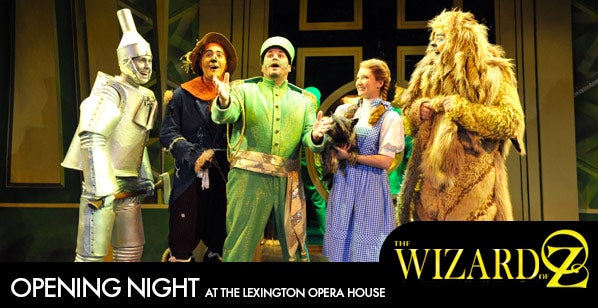 A lavish new national touring production of The Wizard of Oz blew into town tonight just in time to kick off pre-Halloween festivities. With more than a few tricks up its glittering sleeves, this wiz of a show is quite the treat!

Not only is this the opening show of the 2017-2018 Broadway Live series at the Opera House, this dazzling new production is celebrating its opening weekend right here in Lexington. The anticipation from the Munchkins and Dorothys in the audience was palpable as the lights dimmed, but their glee paled in comparison to the obvious joy and boundless energy from the cast on stage and the master stage magicians behind the scenes.

Following weeks of rehearsals, fine-tuning, and a preview performance Tuesday night in Arkansas, the cast and crew made their way to Lexington today for the first weekend engagement of a touring calendar that will take them across the country in the coming months. They're literally off to see the Wizard. They'll make their way through north, east, south and the wicked west over the next eight months. If tonight's Lexington audience is any indication, Dorothy and the gang are in for a very rewarding journey.

Having never seen a professional stage production of the classic MGM film until tonight, I'm thrilled to report this is a spectacular celebration of that classic 1939 film. Bewitching sets, pitch perfect music, brilliantly colorful costumes and an eager to please leading cast and ensemble make for a thrilling journey down the familiar yellow brick road. Flying monkeys? Oh, yeah. Flying. Monkeys.

If you were fortunate enough to see the national tour of PIPPIN on this stage last season, you'll be thrilled to know this Oz is from Prather Entertainment, the same company that produced that magnificent revival. The stage is aptly set for another Broadway Live season at the Opera House. Dorothy wanted nothing more than to find her way back home, but you'll be wishing you could click your heels three times for a bit more time in this wonderful world of Oz.

INSIDER TIDBIT: Lizzie Webb, the Musical Director, is making her national tour debut with this production, but she's not travelling alone. Her little dog Murphy is starring as Toto!