After a long winter's nap, the Broadway Live season at the Lexington Opera House gloriously returned tonight in an eye-popping, soul-soothing, and altogether thrilling production of the multiple Tony winning musical PIPPIN. 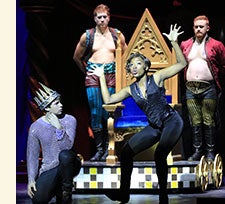 The original PIPPIN in 1972 launched the career of Ben Vereen (who toured here with the show when I was Pippin's age) and brought to Broadway the catchy tunes of Stephen Schwartz, who would go on to bring the world WICKED.  This production is fresh from the 2013 Broadway season, where it garnered four Tony Awards including Best Musical Revival.

Director Diane Paulus and Montreal-based Gypsy Snyder teamed up to bring a Cirque du Soleil vibe to the proceedings and became the female dynamic duo of the season. What they created wowed the critics and audiences alike.  This new tour just started a few weeks ago and Lexington is lucky to get it so early in what is sure to be a triumphant sweep of the nation.

Those of us who couldn't make it to New York a couple of years ago when this production wowed Broadway probably have much more humbling memories of PIPPIN.  College productions or community theatre stagings of the 1972 original where the "magic to do" was primarily rabbits out of hats and flowers blooming from Fosse-attempting black canes.  Earnest in their attempts, and charming as they were, this PIPPIN is profoundly Not That.

One critic went so far as to compare the opening number here ("Magic to Do") as the most exciting first few minutes on Broadway since the animals paraded through the audience and onto the stage in THE LION KING's "Circle of Life".  I'm not sure I'd go that far, but it is pretty astounding.

You don't get collective audible gasps of surprise and joy like the ones garnered by this production very often. Lexington is going to be talking about this production for quite some time.  What better way to beat this gloomy January weather than to come downtown and join the circus! Amid the ceremonies and parades and marches around the nation this weekend, why not throw in a little Broadway magic!