There's going to be one heck of a rock and roll celebration to bring the 40th Anniversary Season of Broadway Live at the Opera House to a close when The Midtown Men roll into town this April.

The Midtown Men were members of the original cast of the Broadway smash musical Jersey Boys, which just closed this past winter in New York after an eleven year run.  The four formed the Midtown Men in 2007 and have been touring the country ever since to sold-out audiences. 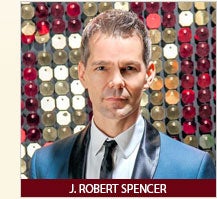 I recently caught up with Midtown Man  J. Robert (Bobby) Spencer by phone, and had a chance to talk about the phenomenal success of their touring show.

I mentioned that there are a lot of touring shows that feature hits of the 60's and 70's yet somehow the Midtown Men production seems to raise the bar for what some may suggest are typical "cover bands" or "nostalgia tours".  When asked what he thought sets Midtown Men apart, Bobby didn't hesitate.

"The Broadway credentials, the chemistry we bring to the stage, and our dedication to bringing the timeless classics to the stage with energized arrangements," Bobby suggested. "And the gossip!  People love to hear our "behind the scenes" stories from our Jersey Boys experience."

"We're always grabbing new songs and bringing them into the mix, " he continued.  "The set list has changed a lot since we were last in Lexington in 2012.  That's part of the joy of doing this. We like to keep it fresh. And as we continue to tour, the audiences let us know what to keep and what to tweak. People are loving our new Monkees and Buffalo Springfield additions. But we also know what to keep.  We have an incredible new Jersey Boys medley that rocks the house!"

With Jersey Boys recently closing in New York and in London after a record-breaking run, I asked Bobby if he and the guys thought that might impact their future success.

"We have talked about it," he said, and quickly added, "But you know what? We looked a few months ahead and our bookings are actually increasing.  I think we've established our own "brand" that audiences will continue to follow."

The Midtown Men self-produce, so they are free as businessmen to make their own tour schedule that allows for family time and the pursuit of other projects. Bobby is currently working on finishing up a solo album and at the same time pursuing bringing a well-received new bluegrass comedy that focuses on the American Civil War.  He originated the role of Abraham Lincoln in the original workshop.

I reminded him that Mrs. Lincoln was born right here in Lexington a few doors down from the Opera House.

"I didn't know that!" Bobby said, "I'll definitely have to stop and pay my respects to the family while I'm in town!"