The Cirque Behind the Magic of PIPPIN

There's much more than magic to do in the Tony-winning revival of PIPPIN that flips and flies its way onto the Lexington Opera House stage January 20-22 as the first production of the new year.  What sets this production apart from the original 1970's era classic and brought awe to audiences, critics, and Tony voters alike is the stunning artistry of its "resident circus creator", the phenomenal Gypsy Snider. 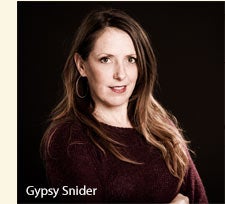 Snider does for PIPPIN what Julie Taymor did for THE LION KING. While Taymor used innovative puppetry to bring the animated Disney movie to new heights, Snider taps into her life-long career as an alternative circus performer and creator to completely invigorate the landscape of PIPPIN.  The result is one of the most spectacular Broadway musical experiences since, well, THE LION KING.

Snider began her circus career at the age of four in San Francisco with her parents' troupe, Pickle Family Circus, which was the first alternative circus in the United States.  She went on to tour internationally with Cirque du Soleil and co-founded the Montreal-based acrobatic troupe Les 7 Dogts de la Main.

"The circus had always been a part of my life, " she told Broadway.com in 2013, "but everything turned upside down in January 2008."

Snider was diagnosed with advanced stage colon cancer and underwent massive abdominal surgery and rounds of chemotherapy and radiation.  She was unsure whether to continue her career or "just move to the country and raise my two daughters in a stress-free environment". During this difficult time, Diane Paulus approached her about a new project she was working on for Broadway, a revival of the 1972 classic PIPPIN.  With her cancer in remission, the Paulus/Snider collaboration came to fruition with the 2013 opening of the newly cirqued-up PIPPIN, which went on to win four Tony Awards including Best Revival of a Musical.

PIPPIN, with its Bob Fosse choreography and music and lyrics from WICKED's Stephen Schwartz hardly needed more to add to its magic.  But this new PIPPIN has more than a few tricks up its sleeve when it soars into town in January, thanks to the cosmic collaboration of its original director Diane Paulus and cirque creator Gypsy Snider.