Deja vu?  It's understandable if you feel like you've already seen the Broadway smash Jersey Boys at the Lexington Opera House, but you haven't.

Twice in recent seasons, the series brought to town Midtown Men, a popular touring quartet that features four of the original stars from the Broadway show performing a variety of pop hits from the same jukebox, but that was NOT Jersey Boys.

Now, finally, this is it!  For over a decade Jersey Boys thrilled audiences at the August Wilson Theatre in New York, while its touring company blanketed the U.S.  Additional productions were mounted in London, Las Vegas, Australia and South Africa. 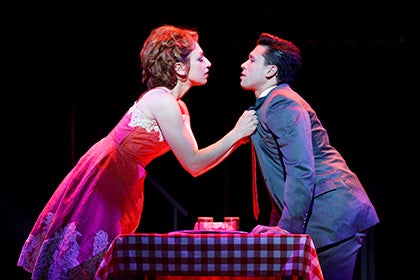 By the time the New York production closed last January it had grossed more than $550 million on Broadway alone, with a worldwide take of over $2 billion.

The show follows the rise of four of the Garden State's favorite sons-- blue collar guys from Newark who became known as The Four Seasons, and, later, Frankie Valli and the Four Seasons. They were the biggest pop band in the world before The Beatles.

Beyond the irresistible music ("Sherry," "Rag Doll," "December, 1963 (Oh, What a Night)," and "Big Girls Don't Cry") the show's mass appeal comes from how it combines multiple compelling dramatic themes into one:  its rags to riches tale; a "Behind the Music" peek backstage into the showbiz world and a universal story of family and relationships.

Brilliantly structured, the story is divided into four sections with each narrated by a different member of the band as they deal with highs and lows of fame and with each other.  Four "seasons", if you will.  Smart.  That's one key to how this show is elevated above what standard jukebox musicals offer, and probably went a long way in helping it garner the Tony Award for Best Musical.

"They ask ya "what was the high point?" The Hall of Fame, sellin' all those records, pullin' "Sherry" outta the hat?  It was all great. But the first time the four of us made that sound, our sound... when everything dropped away and all there was was the music... that was the best."

Be there March 1-4 at the Opera House.  It may just feel like the very first time.

Get your tickets here!