From the first drumbeats of the opening song to the iconic finale that had the capacity crowd on its feet, Dirty Dancing: The Classic Story on Stage is just the "lift" we need to tempt away the mid-winter blues.

An homage to the original 1987 flick hits all the right notes. Nearly the entire soundtrack, which sold an incredible 11 million copies in the United States alone, is faithfully represented.

Unabashedly enjoyable for what it is, be prepared for what it isn't: a traditional Broadway musical. While much of the music is performed live by an on stage band, some of it (perhaps thankfully) comes through original recordings from the soundtrack. Johnny Castle nor Frances "Baby" Houseman break out into song. The vocals are instead handled by an adept duo from the ensemble. It's kind of off-putting (at least to this Broadway purist), but I admit it also rather works. 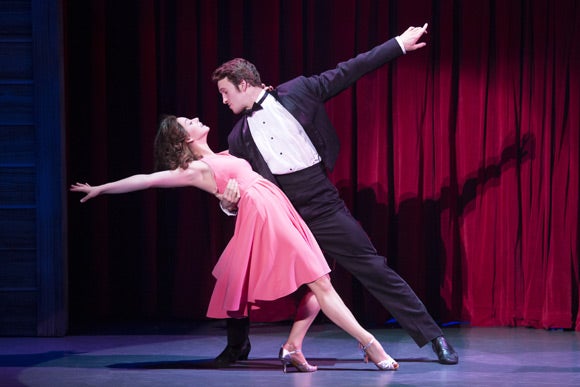 You're more than likely coming for the dancing anyway, and there's even more here than was in the movie. The storyline is intact, as the stage script was written by Eleanor Bergstein, who wrote the semiautobiographical screenplay for the 1987 film.

There's just enough spectacle in the technical aspects of the production. Video projection is effectively used to recreate some of the iconic outdoor scenes from the movie, in case you were wondering how they were going to bring a Catskills lake onto the Opera House stage.

Nearly 5,000 people are going to see Dirty Dancing at the Opera House this weekend --more than any touring production in recent Broadway Live history. And baby, are they going to be glad they did!