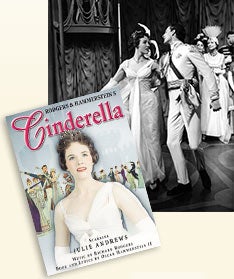 The tale of bringing "Rodgers+Hammerstein's CINDERELLA" to Broadway reads rather like a fairytale story in itself.

Once upon a time there was a fair maiden known as Julie Andrews who dreamed of a starring role in a knew kingdom called Television. The sorcerers at CBS heard tell of her desires and conjured up a retelling of an ancient folk tale of a young maiden forced into a life of servitude by her evil stepmother. They commissioned new music from the brightest bards in all the land, Oscar of Hammerstein and Richard of Rogers.

The result was a live broadcast in 1957 that reached an unheard of 100 million viewers. The television treat was revived for the small screen in 1965 (starring Lesley Ann Warren) and again in 1997 (with pop star Brandy and featuring Whitney Houston as the fairy godmother).

And then, at the stroke of midnight, the musical went silent for over ten long and lonely years.

But one day, the villagers who had become entranced by a recent bevy of beautiful Belles and Ariels and Elsas again longed for the return of their original princess.

And so it was that the mythic musical, long ago loved by millions on the small screen across the land made its way to Broadway for the very first time in 2013.  With a twist.

This new Broadway production, now in its second national tour,  is very much in-the-moment  with its portrayal of Cinderella as an earnest, empowered young woman who is not simply and romantically "rescued" by a handsome prince. No, no. This damsel is not so much in distress but on a mission. She awakens the prince, a clueless heir to the throne, to the social injustices and financial inequities in the kingdom he is about to inherit. Can he not see the harmful policies that are being propagated by his self-serving father that he is about to inherit? A fairy tale with a populist revolution! I'm not even kidding.

Not to worry though.  By all accounts the new messaging is done with wit and humor and is mounted amidst what you'd expect from a multi-Tony nominated Broadway spectacle.  Luanne Franklin, Opera House Director of Performing Arts, assures me, "The pumpkin becomes a coach; the woodland animals become the driver and foreman, and Cinderella's rags become a beautiful ball-gown right before your eyes, and with no animation neccessary-- the Tony winning costuming and special effects are truly theatre magic!"  And there's also, of course, the timeless beauty of the beloved musical score from Rodgers and Hammerstein.

And so it comes to pass, in the end we still love Cinderella because she's beautiful, but this contemporary princess might just help us each see life outside our own little corner....forever after.

INSIDER TIP:  Be sure and arrive early if you'd like to have pictures of your little ones in their fairy tale outfits taken in front of the selfie wall in the lobby.  This show is sure to attract a lot of families with princesses in tow!  It also promises to be a near sell out if not completely sold out, so if you don't already have your tickets, jump to it!