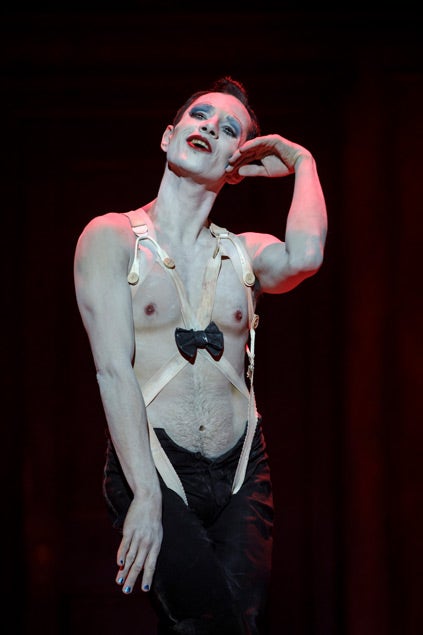 Wrapped in a secure seat in the balcony on Opening Night and ready to immerse myself in the brilliant songs of Kander and Ebb. " I know this music, I know the details, " I thought. But then The Emcee arrives out of darkness and immediately the shadowing memories of Joel Grey and Liza with a Z are bygone. Something new is happening. This Cabaret is hauntingly different. Sexy, bawdy, raunchy, even. And ultimately terrifying.

Nothing can prepare you for it.

I thought I was ready. I did some research before the show. The nationalism and onset of the Nazi regime and how the themes are so much of the peripheral reality of today's news. I get it.

When setting out to do a review, I kind of wanted to avoid the contemporary parallels that make this show so continually compelling. That's pretty much what every other reviewer ever talks about.

So I'm all CABARET is entertainment. Not politics, right? That's what I tried to think. But then I experienced this profoundly moving production and remembered.... Sometimes art is entertainment AND politics. There is no avoidance here. The Tony winning Roundabout Theatre Company's long-touring production of CABARET is vibrant for just that reason.

And, by the way, if you thought that sold out show a few weeks ago had "dirty dancing", whew, boy. Welcome to the Kit Kat Klub.

"Serving as the story's central hub of activity is the Kit Kat Klub, a nefarious local cabaret joint known for its wild debauchery, fluid sexuality, and carefree attitude, which is a much livelier, less serious contrast to the tragedies that lay ahead for Germany and the onslaught of Nazi rule outside its doors. The face of the club, and our story's unofficial narrator and chief instigator, is the libidinous Emcee who entertains patrons with innuendo-laden witticisms and rambunctious songs...all laced with overt sexual overtones, spellbinding choreography, and not-so-subtle political and social commentary." -Michael L. Quintos, OnStage Los Angeles

It's harsh. It's decadent. It delivers.

"Leave your troubles outside! The girls are beautiful... Even the orchestra is beautiful."
-The Emcee