The opening night audience for The Addams Family was in stitches from the opening sequence until the final curtain call, in this revamped and much-improved touring production of the Broadway musical inspired by the legendary Charles Addams The New Yorker cartoons and subsequent TV and movie incarnations.

Word-of-mouth kept the show alive in New York, as theatre goers defied the harsh criticism the production received from the New York media. On most weeks of its run ticket sales were in the same league as The Lion King and Wicked. When the show closed on Broadway, the creative team took the time to rethink the production from every angle, and its reincarnation on tour has become a continued smash with audiences across the country, and has won over the critics as well.

The set is gorgeous. The lush ruby curtain that drapes the stage at the opening of the show and becomes a key element in the staging of transitional scenes looks like it belongs in the Opera House. It may seem odd to mention a proscenium curtain in a review, but it is really that breathtaking. 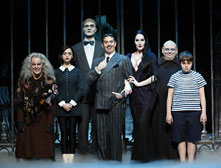 The cast is first rate, from the lead players to the ghostly chorus line of Addams ancestors. Of particular note is Jennifer Fogarty's outstanding turn as Wednesday Addams, the daughter whose age has been bumped up to 18 and whose puppy-love-turned-engagement ring romance with a "normal" boy from Ohio serves as the center of the storyline. Ms. Fogarty has the pipes of Idina Menzel and the comic timing of Kristen Chenoweth. If the producers of Wicked ever want to double-cast Elphaba and Ginda with the same actress for some reason, Jennifer Fogarty is ready. Even if this show that gloriously surrounds her weren't so amazing, her performance alone would be worth the price of admission.

What other critics are saying about this tour:

"If the New York production of The Addams Family had been as good as the version currently (touring), the show would have been a cinch for the 2010 Tony Award and would still be running on Broadway."
- Lawson Taitte, Dallas News

"Full of charm, wit and surprises that explain why it's a HIT on its national tour!"
-Dominic Massa, CBS New Orleans

INSIDER TIP: Don't forget the FREE Arts Appetizers event at the Horse and Barrel (next to deSha's) at 5:30 on Sunday evening. Bring your ticket stub from any performance this weekend for admission. Ghoulish complimentary appetizers and a chance to meet the cast! Bring your camera!